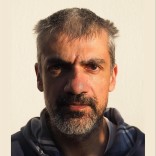 I was born in nineteen sixty-four in the estate where Citrus is situated nowadays, which belonged to an Egyptian merchant, who provided his daughter with it as a dowry. My father used to be a caretaker in the land till ’49 and in ’74 he took a loan and bought it. In ’82 he decided to turn it into a hotel. I was a High School graduate at the time, I had no intention of continuing with studies, so I stayed by him.

I like watching things and see how I can make something which doesn’t look like anything else and which can provide a solution. In 1982, when I finished school, I started a small bar in the estate, which flourished; I ran it till 1991, when I said to myself I’d had enough. Along with the bar I had a shop in town with modern furniture. At that time I moved to England for six months as my big dream was to become an aviator. I started learning the language, but then I got married and so I didn’t go back. I was six when I broke my arm and they got me into a plane, a great pleasure for me. It was then that the first planes had come to Chios, back in ’69 – ’70, when the airport began. It was the only different thing I used to see passing over our estate.

My father had been running Perleas, the manor we are in now, since ’68 as a caretaker; he kept it till ’90. On my return from England, I wanted to deal with the estate. My ex-wife, Claire and I went to Athens to find the owner. She gave it to us and I undertook it as a caretaker, not as a supervisor, it is different. The caretaker is not paid, he does business within the estate, and this is a relationship that has disappeared, whereas the supervisor is paid, he is in the estate and looks after it. We turned it into a hotel and wanted to create a verticalised unit, that is a piece of land which provides the hotel with foodstuffs. In ’93 we integrated it into biological agriculture, which was a pioneering movement back then and in ’95 we took the certification for the production of biological products. It was a tremendous success, we had full work for five and a half months. The stable could be visited and at the same time we took eggs, turkeys, pork; our clients ate here, the cuisine was purely Greek.

In “Perivoli”, my mother was running the hotel; as she was getting old, the hotel was also getting old. In ’08 the “Perleas” owner died. The estate was about to be sold and I was feeling insecure. Then crisis turned up, so we left and went to Perivoli. The University of the Aegean was giving money within the scope of biodiversity. I had a talk about it with my cousin George Plakotaris, who advised me to start a tangerine museum with this money. I agreed, even without thinking of how that could be done, I got some ideas from a relevant museum in Valencia, but we made its construction all by ourselves. The museum has an experiential truth; when a museum appears, it means that an era has come to an end. For us it is a memorial for all those we’ve heard about from our parents and which we never experienced ourselves. The advantage of our museum is that it is located within an estate, in the area of Kampos and doesn’t refer to distant memories. This museum enlightened me, I learnt the history of my birthplace and realized that knowing your background well, it is easy to find new steps.

All my life I have been doing business around Kampos since the age of eighteen, when I sold a kind of ice cream that I named Perivoli. In 2015 I quitted Citrus and dealt in furniture. I’ve been collecting antiques since I was a child, I liked repairing them. I was twenty-two when I firstly repaired an old, wooden radio. I restored all pieces of furniture of the museum, the house and the hotel by myself and in recent years I have made furniture for many a people, as I deal mostly with it.

In summer I wanted to leave, so I went to Belgium. I did lots of jobs. I was acquainted with a farmer who provides a network of two-hundred and fifty families with biological products. The day before last I sent him the first load of tangerines. They have created new communities in Europe, they have communities of biofarmers. You go and tell them who you are. It did good to me that I left from the misery of our country as we live in poverty, in all levels. We have recently decided with Claire to restart Perleas, so that it can become what it was in the past. It is my belief that man can do everything. There is no way of failing in what you have aimed at in your life, whatever it is, man is always capable of it.

Kampos is not just what we see around us, Kampos is its people, these people who owned it years ago, they knew what they possessed and also knew why they possessed it. They were serious merchants and universal citizens. We, the people who work in Kampos, don’t have such abilities and connections. These estates were used as yachts, they were something private, you go inside and nobody sees you. We live in a most expensive scenery of a most expensive performance, which was given and is over by now, though the mob has got in and everyone plays whatever role comes in their head.

When Kampos was created, that was done without laws, there were no laws about how to make a cistern and a winch. Those people constructed amazing things. Kampos was made by people, was destroyed by people and people are called to remake it. Something smart and new has to be found that will open new markets so Kampos can sell as a pioneer. The logic of barrow and loose selling still prevails, whereas my own approach is one by one, with paper and seal, two kilos in a carton. You don’t need anything else but an update to your history. In ’93 I tried to talk to them about biofarming. If they had listened to me then, the problem would have been solved. What matters is how to believe in a vision and follow it. Ten estates can set up a network, pass into biological agriculture and the road is open.

Kampos is a gold mine covered with dust. If you clean it up and shine it, it will start having an incredible flow. We are members of the European Union, we are a uniform country, we have uniform currency. I loaded a pallet of tangerines and they now travel to Belgium with a simple invoice, just as I would do for Athens, it’s so simple. Here we are reserved, we have to open up and become extrovert. People should travel and see that we are citizens of a huge country, which is Europe.

The refugee issue, this immense problem, can be turned into an advantage. If we all had in mind how to look after these people and this were transmitted overseas, it would be to the benefit of Chios. If you have a problem, deal with it because you can’t do something else, get proud out of it, so that you can say I did my best for my birthplace.

No matter how ample time seems to be, it finally comes to an end. In my mind I feel as if I were twenty years old, I have lots of energy, but when it comes to numbers, it is no good. The generator of happiness is inside us, so in this part , I feel happy, ‘cause I have done exactly what I wanted.

I met Vaggelis Xydas in Perleas, in mid-January and he talked to me about his life. I went there again after a few days so as to take some photos; we went up to the guest-room; the lounge is full of antiques, a double bicycle, cameras, radios, all restored by Vaggelis and preserved in perfect condition. I asked him why people collect things. “I was thinking about it these days, I feel they have the illusion of defeating time.”

Translated into English by Anastasia Pentakis 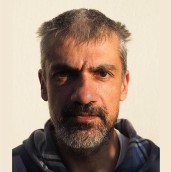 It’s a day’s walk from Egrigoros to Vrontados