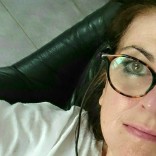 She was born in Chios, where she lives and works…

“Hey” my mother would shout at me, “stop being such a lazybones!” “What’s that thread you’re sewing? Darn… A dawdler’s thread would always be five feet long!”

Maro was big on housekeeping and an enthusiast. Even at eighty-five, despite that hip fracture forcing her to walk around with a frame, she never ceased to apply all sorts of lotions – day and night – and carefully pluck her bushy eyebrows to make them all neat and tidy. “Make sure you put cream on your face” she kept telling me, “or it’s going to end up like a shoe. Darn… those daughters I have. None took after me!”

With all those motherly words – and much more – in mind, I felt like being struck by a lightning bolt upon walking to the cemetery on the hill, two days before May Day. It had been two months since I last stepped by her grave to give it a little clean-up, straighten her portrait, put a little flower… You see, that “blasted thing” (as she would call it) that came about locked everyone up inside, and whenever we ventured out for a walk, a trip to the cemetery would be, you know, quite an off-putting prospect…

“You see what’s become of me? You see? You just dropped me here and you won’t give a damn about me, huh? Oh, the things I have to put up with! The whole wall came down on me! How lucky can I get! Lying dead, yet still suffering!” – it felt like I could hear what she would rattle away about if she were able to see the mess her tomb was in.

Silently, I picked up the pebbles one by one, brushed the dirt, collected the smithereens her portrait had turned into and laid the big marble cross, which despite being knocked out of position when the cemetery fence wall collapsed, had fortunately remained relatively unscathed.

On May Day eve, I was back with a new portrait and a huge flower garland, similar to the dazzling ones my mother used to make for years, leaving everyone in the neighborhood delirious. 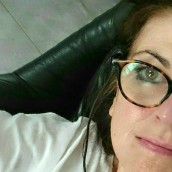 She was born in Chios, where she lives and works as a literature teacher.