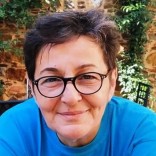 She lives in Lagkada and runs a shop in the…

Sikiada and Lagkada residents hail from the same place, Kila. Some of them built Kidianda and Lagkada while others founded Sikiada and Pandoukios – mountain villages with their havens providing sheltering for fishing boats. Two villages closely linked to Chian maritime life, home to unrivaled sailors, captains, commanders and engineers who’ve spent their whole life in the sea.

“Come over some day; we have a lot of catching up to do” said Roula, “my house is in Aspri Petra, overlooking Egnoussa. Come and I’ll show you around the village, I’ll take you to Rikopo, Anagiros, Alonia, Libadoura”. “But you’re going to tell me about that renowned Sikiada laundry” I said and she laughed.

So, I went over there and I found myself surrounded by friendly people; it was early afternoon, so coffee was succeeded by ouzo, and various tidbits started to appear on the table. “Eggplants with skordalia, that’s the one to try out first, it’s my mom’s recipe” Roula said with a hint of pride, so that’s what I tasted right away.

Prepare and bake for: 60 min in total
Degree of difficulty: Moderate
Serves: 4

Slice up the eggplants, salt them and put them in a colander to drain.

Boil the water in a pot, throw in the eggplants and leave them until soften before putting them back in the colander. One by one, roll them around in flour and deep-fry them before straining excess oil.

(making skordalia)
Soak the bread crust until it totally crumbles and then strain it. Peel the garlic and grind it in a wooden mortar, throw in the rest of the ingredients, the soaked bread, the oil and a bit of vinegar and stir while tasting the blend in case you need to add more oil or vinegar – depending on your preferences.

Add a layer of eggplant slices on a platter and spread the skordalia on them; carry on until all of the spread is used up.

The eggplants coming from Kostas’ garden are wonderful and the skordalia has a strong flavor, allowing both the blood pressure and ouzo to go down!

“You should step by again” said Roula, “On Saint John the Faster’s day or on the Feast of the Cross day, when we’re going to make a fig moustalevria pudding”. She won’t have to tell me twice. 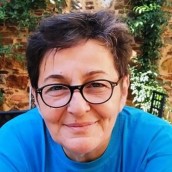 She lives in Lagkada and runs a shop in the city of Chios.