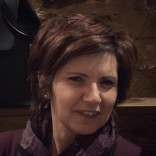 She was born and grew up in Chios. She studied…

Lene was born and raised in Norway. In an attempt to freeze time so that she wouldn’t grow older, she stopped eating when she was ten. That decision led to her suffering from anorexia, a disorder she went on to struggle with for twenty-three long years, constantly dangling between life and death.

Despite all that, she always regarded life as a big gift; a gift that not everyone was able to enjoy, though. “It’s like a nazi regime breathing inside your own body, or like finding yourself trapped in a burning building, unable to find your way out” is how she perceived her illness. Her parents, especially her mother, stood by her throughout her adventure, serving her like a couple of unflagging guards.

When she fell passionately in love with photography, it was down to the same reason: her camera gave her the opportunity to freeze time. Her black and white photos featured elderly individuals, little kids, refugees as well as decay, neglect, pain and loneliness. She used dark tones and high contrast, while skillfully playing with light and shadows when shooting indoors. Art critics in Norway and elsewhere commented that she was a natural.

Lene succeeded in turning her misery, fear and despondency into art and creativity that offered her sanctuary and motivation to move onward.

Chios was the place where she had been spending her vacation for more than the past ten years… for a couple of months every summer. Her first photo exhibition was held in Citrus in 2011. Chios was her entire life, the only place in the world she would love to live. Whenever she would return from the island, doctors were always surprised to notice that her medical condition had ameliorated to a huge extent.

Her tenacity, courage and desire meant that she frequently had to come up against troublesome situations and several minor mishaps.

This was the case on a summer day, in an abandoned house at Volissos, in which she would habitually enjoy taking pictures for hours on end. Upon seeing her enter the house carrying all her equipment, an old lady called the police, and Lene had to be taken to the police department on suspicion of espionage. What upsetted her the most was that her camera memory card had to be kept for inspection.

Some other times, her elf-like presence would scare the life out of some Lovokomio visitors who couldn’t help running away, frantically shouting for help, upon bumping into her among the rubble.

Yet, every so often, a lot of people generously assisted her and stood by her side during her stay in Chios.

Her fascinating last work, her self-portraits, shot in the Lovokomio facilities, manifest the cruel yet beautiful strife occuring inside her; a painful, cracked perspective displays that inner clash. This, along with the exhibition that came after, managed to make Lene known not just in Norway but beyond.

The movie Self Portrait followed, a documentary about the power of art, which also addresses her life during these last years in Norway, in Chios, in various hospitals, as well as the battle between life and death. Moreover, the movie raises serious concerns on the issues of proper diagnosis and treatment for people suffering from eating disorders.

In the summer of 2017, Lene and her mother got involved in a car crash in Chios resulting in her sustaining neck injuries; the incident exacerbated her condition, bringing about additional health issues. Despite a tremendous desire and effort to visit Chios in the summer of 2019, in the end she wasn’t able to make it. She passed away on October, 22, 2019; she was just 33 years old.

Her last request was for her work to become as known as possible not as something related only to anorexia but to human pain irrespective of its source.

The movie Self Portrait premieres on January the 17th in Norway as well as Sweden, Denmark, France and Germany. Trailers that have already come out have managed to receive extremely positive reviews, while the movie has already participated in international festivals. Its release to the Chian public is also among future plans.

More info about her life and her artwork at www.lenemariefossen.com 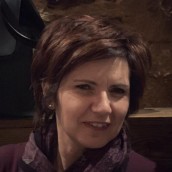 She was born and grew up in Chios. She studied at the Higher School of Tourism Professions of Rhodes and maintains with her family a Tourism Company in Emporios.