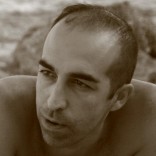 Of Chian descent, he was born in Thessaloniki and he…

Diagram showing the north face of the buildings at 1-3-5, Agii Anargiri Street

Detail from the window glass

Tiles on the floor of the ground floor

The fireplace and the sink in the kitchen

Hall on the first floor

The rooms with the enclosed terrace

Remnants of a life on the loft

The keys to the house. Cabinet under the staircase leading to the loft

Knocker on an exit door

The exit doors on the façade

Ambeliotis family was mainly involved in trade on Chios island during the second half of the 19th and the 20th century. Residences belonging to this particular family were constructed in Atsiki and Agii Anargiri areas, with the plot located in the latter area being in all likelihood acquired after 1822.

Ambeliotis residence is located at 1-3, Agii Anargiri Street, consisting of two buildings. The lintel on the front door on the first of those buildings bears the engraved initials “Λ Α” and a date: “October 1892”; as for the second one, it was erected during the interwar period.

Access to the floor is via a wooden staircase ascending from the lobby, which also features a rainwater storage tank inlet located in the basement.

The five rooms on the first floor of the older stone building are structured around a hexagonal hall (as seen in the floor plan) bearing decorative painting traces on the walls. The living room, the kitchen as well as the restroom in the newer, adobe brick construction are also accessible through this hall.

All ceilings are wooden and colored in shades of azure, green and ocher, while the walls were dyed white, azure and beige. The wooden floors boast chestnut color apart from those in the lobby, the kitchen and the bathroom, which are covered in cement tiles displaying the distinctive grizzly, white and red colors. A cinquefoil leading to the living room bearing multicolored window glasses emulating stained glass is also of exceptional interest. The floor’s total surface area amounts to 140 square meters.

The residence’s height approximates seven meters, with the façade being colored, as far as the older building is concerned, in Pompeii red –as dictated by early 20th century trends. The enclosed terrace occupying the façade was torn down a decade ago. The interwar period add-on construction was dyed using Indian blue color while its façade was taken up by a terrace which was also knocked down later on.

The ground floor is occupied by warehouses and stores. Another half-constructed or ruined residence is located to the west, its current address being 5, Agii Anargiri Street, which also used to belong to Ambeliotis family.

The photographer and the mannequin

Ambeliotis residence used to be owned by a family branch dwelling in the United States. Barber Anastasios Drakakis and his wife were the last tenants of the second floor in the 1980’s. The ground floor is being rented as a warehouse for construction materials. Ambeliotis residence was donated to the Municipality of Chios, which never showed any interest in conserving the building. The dawn of the 21st century marked repeated efforts by various municipal authorities to demolish the house due to their apparently ignoring it being classified as a heritage building.

Note: In European terms, ground floor (being at ground level) generally refers to the floor which exits directly onto the street; by extension, first floor is the floor which one has to use a staircase to walk up to. Typically, the equivalent terms in American English are first floor and second floor. 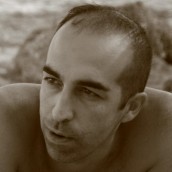 Of Chian descent, he was born in Thessaloniki and he currently works for the Ephorate of Antiquities of Chios.